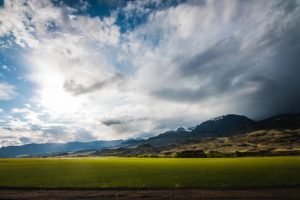 The Tax Court, in a case of first impression, has recently ventured into the perpetuity minefield. One Dr. Douglas Carroll and spouse Deirdre Smith, of Baltimore, Maryland, conveyed a conservation easement in 2005 over approximately 26 acres of open land in Maryland, mostly pastureland zoned for agricultural uses, to the Maryland Environmental Trust (MET) and the Land Preservation Trust (LPT). The former organization is a quasi-governmental agency, the latter a private, nongovernmental exempt organization. The protected property consisted of two parcels of unequal size; upon the smaller parcel sat the taxpayers’ two-story primary residence, and, on the larger, a small (1,000-square-foot) house where a farmhand tenant resided.

It will be presumed that you, concerned reader, are familiar with the basic requisites for the deductibility of a conservation easement donation: a “qualified real property interest” (here a perpetual use restriction); a “qualified (donee) organization”; and the advancement of one or more statutory “conservation purposes”. We shall therefore abjure recitation of the court’s quite detailed finding of the satisfaction of those conditions, as well as its attentions to other necessary procedural provisions, which similarly were properly included in the easement deed.

To this point in the easement-construction process, Dr. Carroll’s planning seems to have been pretty typical–attention to the essential statutory requisites. But we shall now ask you to ponder an often lightly contemplated regulation, and thus to descend with us into the rabbit hole of Taxland, from which we may not emerge unscathed.

As you well know, a tax-deductible conservation easement must be conveyed with the explicit intention that it last forever, i.e., in “perpetuity”. Although historically (and statistically), the extinguishment of an easement is an exceedingly rare event, the Treasury regulations nonetheless acknowledge that possibility, subject to a judicial determination that the conservation purpose the easement was created to serve has become “impossible or impractical.” In that event, the “proceeds of sale” must be divided between the landowner and the easement holder. The formula to govern that division is the focus of Dr. Carroll’s current bewilderment (and mine).

The regulations’ formula that determines the value of the donee’s property right in the easement, established upon creation and fixed forever after, is “the proportionate value that the perpetual conservation restriction at the time of the gift, bears to the value of the property as a whole at that time.” Treas. Reg. 1.170A‑14(g)(6)(ii). The policy embraced by that rule appears to prevent a landowner windfall and to insure that a charitable contribution of an amount intended to produce perpetual benefits will do so, even where the objects of the taxpayer’s original intentions can no longer be attained. So far, so good.

We shall now take the liberty to presume that Dr. Carroll asked the question that led him to his date with destiny in the Tax Court: “What happens, in the event of extinguishment, if the charitable contribution I assert on my tax return is reduced on audit?” To which the proper answer would surely be: “In that case, the numerator in the division-of-proceeds formula of the regulations would become the ultimately agreed-to or adjudicated amount.” And that indubitably logical assumption became an elaboration upon the usual regulations-based language in the Carroll deed; specifically, the numerator referred to in the deed’s division-of-proceeds clause is “the deduction for federal income tax purposes allowable by reason of this grant”. (Let’s call this the “allowance numerator”.)

A little procedural illumination is now imperative. The Carroll easement grant was made in 2005, a year barred from audit by the statute of limitations. The years at issue–2006, 2007, and 2008–were those in which the carryover contribution deduction had been asserted. And from the court’s careful elaboration of the standards for deductibility in IRC section 170(h), we shall fairly assume that the case was addressed at trial as one involving no more than those standards–conservation purpose, etc.

Indeed, that is precisely how the case was presented to the court. The ultimate ground for decision, however, was one presented only after trial, in the government’s post-trial brief. That ground–failure to meet the “perpetuity” expectation on account of the allowance‑numerator elaboration upon the division-of-proceeds clause–was never presented for analysis or refutation by taxpayer’s counsel (or friends of the court). So let us follow the winding yellow brick road a little further ….

Having spent over half its lengthy opinion assuring the reader of the Carroll easement’s qualification under the standards attorneys worry most about, particularly the conservation-purpose test, the court then broached the perpetuity issue, acknowledging that the issue presented was one of “first impression.” It then concludes that because the numerator of the division-of-proceeds clause is “the deduction for federal income tax purposes allowable”, the conservation purpose is not protected in perpetuity. A truly astonishing leap! And an absolutely deplorable judicial sleight-of-hand that implores us to ask: When would the “allowable” deduction (Carroll’s numerator) fail to equate with the “proportionate value” of the easement (the regulation’s less precise numerator)?

Note that the word “allowable” does not mean “allowed”. An inadequacy of income could prevent full enjoyment of an otherwise allowable charitable contribution deduction, on account of percentage limitations based on adjusted gross income, but that would not change the donee’s entitlement to the formulaic division of proceeds under either the regulations’ or the Carroll easement’s approach. And to suggest, as does the court, that “At the time the conservation easement was granted, petitioners’ deduction faced many hurdles that were unrelated to the value of the easement”, is profoundly disingenuous. Citing Graev, 140 T.C. 377 (2013), the court, by way of footnote, produces a ten-factor laundry list of threats to an easement’s qualification, none of which has the slightest relevance to Carroll’s asserted deduction, and many of which are dismissable as threats to deductibility on the court’s own findings in the Carroll case itself. No, the only threat to deductibility is that found in the ground for decision itself: the allowance numerator. Can you say “bootstrap”?

It is not often that a tax lawyer finds occasion to invoke the phrase “miscarriage of justice.” But consider the plight of Douglas Carroll and Deirdre Smith. They face monetary obligations of several hundred thousand dollars, consisting of tax deficiencies, interest and penalties. The property subject to their easement grant remains burdened by the restrictions thereby created. (No, there is no relief from contractual obligations on account of tax disappointments.) And most ironically, in the highly unlikely event that it should ever be proposed to terminate the easement for impossibility or impracticality, the opposition of donees MET and LPT is virtually certain, given that the Tax Court has now effectively blessed a zero‑value numerator in the division-of-proceeds clause.

Absurd, what? Douglas Carroll, meet Lewis Carroll. But absolutely curable for Dr. Carroll, by Fourth Circuit Court of Appeals reversal and remand. And for the land conservation community at large, by a simple amendment to the offending regulation, recognizing that, for an easement which otherwise passes muster, the correlation between the allowance of a deduction and the value of the easement will be perfect.